Wind of Change? What the new CySEC rules mean to the FX industry

CySec’s strategic move capitalizes on a potential shift in the global FX landscape.

As someone who is very passionate about FX and football, I’m always keen to draw parallels between both whenever possible.

Where football and, indeed, sport in general is concerned, 2016 will forever be remembered as “the year of the underdog” with Leicester's City’s remarkable achievement in bringing home the Premier League trophy to a relatively small, and little known, city in the UK. From battling relegation last year, Leicester City rose victorious against the billionaire power houses of London and Manchester, to win the toughest league in the world against all odds. It truly was a remarkable and historical achievement.

In the world of FX, I also believe that this year will be remembered for two particularly unexpected events:

You Win some and you Learn some.

Of course, people will quickly jump to remind us how CySEC has dealt with major economic events in recent years and the criticism they faced because of their actions (or inaction). However, for those who think that CySEC mishandled things in the past, perhaps ask yourselves the question; who amongst us has never made a mistake? In fact, as evident in sport, in business and with life in general, those who make mistakes, and are able to learn and adapt from those mistakes, are the ones who end up succeeding in the end!

I believe this is exactly what CySEC has managed to achieve in 2016 and I can’t help but feel that they are now beginning to win over a few of their doubters. They have combatted the reputation (and criticism) of being over-lenient with the implementation of stricter regulatory measures focusing on sales operations, accompanied by guidance and requirements on choosing a Liquidity Provider. Both are significant changes that will hopefully guarantee that the Cyrus FX sector survives and flourishes in the years to come.

With the economic chaos of 2013, strict EU bailout terms, the SNB dislocation and the brokerage collapses in 2015 and 2016, it is fair to say that Cyprus has been in the middle of a never ending storm on the high seas with its people suffering in several ways economically:

To most, this would seem an unsolvable equation however the people of Cyprus and CySEC have stubbornly survived and have worked hard to rebuild the economy and the reputation of the Island as a stable financial and regulatory environment. Cyprus is still home to numerous major FX corporations and some of the world's thriving MT4 brokerages.

Only recently, CySEC’s Chairwoman was quoted on Finance Magnates encouraging brokers to undertake proper due diligence when sourcing their Liquidity provider, and not to rely on a single source for price liquidity. This is something that we at Advanced Markets have also advocated repeatedly for some time. An example of this can be seen from our Workshop: “Is it really Prime of Prime?” in the iFXEXPO in Cyprus earlier this year.

I would definitely echo CySEC’s recommendation and encourage any broker today to do thorough due diligence when choosing a liquidity provider and to ask themselves if they are in fact working with a true Prime of Prime.

Pertinent and fundamental questions to ask:

Another measure that, from a neutral aspect, could lower risks dramatically, would be the implementation of a maximum capital risk exposure requirement limiting a brokerages' market risk exposure to, for example, 50% of their capital. A measure like this would probably be unpopular among many initially however, it would surely help stabilize and safeguard the industry as a whole in the long run. It could minimize the risks of brokerage meltdown and safeguard businesses, shareholders and their employees. This would also benefit the traders and take us closer towards a more transparent operation model by sending the message globally that FX business in Cyprus isn’t simply a hit and run affair.

The term “Truly Segregated Funds” is widely used in today’s retail FX world, referring to client monies that are not only segregated from a liquidity provider's operating account, but that are truly segregated from other clients' funds as well. This is something that is easy to say but, in reality, very difficult to provide. Perhaps it should be another mandated requirement to ask Liquidity Providers to offer this feature to their clients where warranted?

Advanced Markets provides its brokerage clients with this option through Macquarie Bank. We offer fully-segregated trust accounts for qualified parties where funds are 100% segregated in the client’s own name, providing an additional layer of protection from any unexpected event, such as when the SNB removed its peg in EURCHF in January of last year.

Speaking to regulatory consultancies on the island recently I have found that many brokers are now undergoing restructuring with some looking at their Sales departments with a view to implementing a more marketing-driven operations model. They seem to be seeking to emulate the strategy employed by those brokers that have quietly risen to the top of the ranks in recent years.

Despite stricter regulatory measures it seems Brokers are still coming to Cyprus. The fact remains that Cyprus has many well-known benefits such as:

Recent developments and factors in nearby jurisdictions also help strengthen the case for Cyprus. Israel is going through a regulatory overhaul and brokerages are beginning to move their headquarters out of the country. The natural alternative is just 40 minutes across the sea in Cyprus. It also appears that Malta and the MFSA may be looking to restrict the influx of brokerages seeking regulation there.

Taking all of the above into account you could potentially argue that, like a true Leicester City underdog story, CySEC in 2016 has suddenly found itself in the driving seat by helping to reinvent Cyprus as a viable, fast growing center for FX. Whilst London will surely remain as the core/major center for FX globally (regardless of Brexit), the newly-crowned premier league champions of Leicester City have shown us all that anything is possible and Cyprus can definitely establish itself as a rightful challenger in the premier league of regulatory environments.

How to get started in Cyprus - download a free guide "Procedure to setup a CySEC MiFID Investment Firm License": 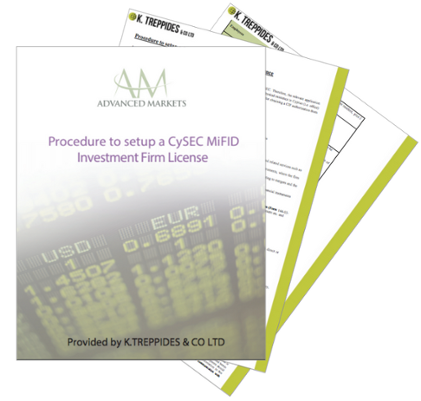 How to get started in Cyprus - download a free guide: "Procedure to setup a CySEC MiFID Investment Firm License"